That’s right, tonight’s pickup of the night is the one and only:

I’ll be the first to admit that this guy is definitely a stretch in terms of fantasy potential, but you gotta admit, the title was catchy, right? But seriously, Frye had the fourth best line of the night last night according to basketballmonster.com–and they know their stuff. So consider him wisely. Last night he put up 22 points, 11 rebounds 2 assists and 3 (!) steals in 38 minutes and led the Blazers to a 112-103 victory over the Los Angeles Lakers 😦 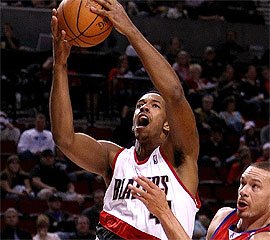 Saying that the Knicks aren’t in disarray is like saying In-n-Out Burger isn’t delicious (full disclosure–I worked there for a year). So it’s not a surprise that a Knickerbocker has landed on our Pickup of the Night list. To be honest, I’m not sure what the heck is going on with the Knicks other than Isiah is going to have a meeting with his new boss soon (ooh!). In terms of Chandler, the man put up 19 points, 9 rebounds and 3 blocks last night and put up 23 and 8 the other night, so he definitely should be looked at. Give it some thought and only pick him up if you need someone in his position.

For daily pickups and other fantasy basketball advice, sign up for our free RSS feed.

5 thoughts on “I Don’t Like Milkshakes, but I’ll Take a Frye.”