Wow the NCAA Tourney games were amazing today. Two great endings with Stanford and UCLA winning. Looks like there’s something special going on with the Pac-10. Here is our man for the night:

I’ve actually been waiting for this rookie to get some more minutes and onto this list. Well, tonight is the night. Green had 23 points on 7-13 from the field and 7-8 from the line with 2 threes, 7 rebounds, 3 assists, and even chipped in a block. Best part of all, he had only 1 turnover. With Chris Wilcox injured, he will get some starts and so look for the rookie tandem of Durant and Green to take over. 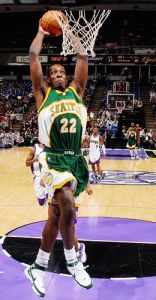 I could not decide which guy to put on this list, so I put them both on. Mohammed shot an amazing 8-9 from the field and claimed 14 rebounds and 2 blocks to go along with his 16 points. Not to be outdone, Milicic had 19 and 10 with a steal and 3 blocks to go with 6-11 from the field and an uncharacteristically good 7-8 from the line. Most importantly to them (and not at all important to us since both teams suck), the Bobcats and Grizzlies both won.