LINAS KLEIZA (Den, SF)
He’s been having an up-and-down season to this point, but recently he has begun to pick it up again. And what’s not to like about a team that has scored over 100 points a game in every game since February 25th and over 115 points a game the past 5 games? But seriously, pick this guy up if your desperate for 3 balls, points and percentages. Last night he put up a pretty good line of 23 points on 9-11 shooting with 4 rebounds in only 23 minutes. 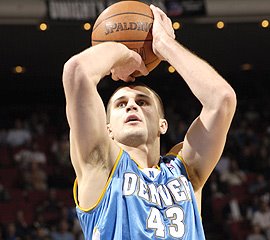 Second Best: EARL BARRON (Mia, C)
Ok so Miami stinks–we know that. But because of all the injuries and troubles, minutes are up for grabs if you can show you deserve them, and that’s what Barron’s been doing recently (and it’s probably because he doesn’t want to be sent back to the D-league). In his last four games he’s logged an average of 28 minutes a game and has scored 12.5 points and pulled down 6 boards a game during the stretch as well. This is probably a stretch pickup, though, so don’t go dropping Camby or Chandler just yet. I’ll monitor Barron for you.

One thought on “Pickup of the Night: March 21”